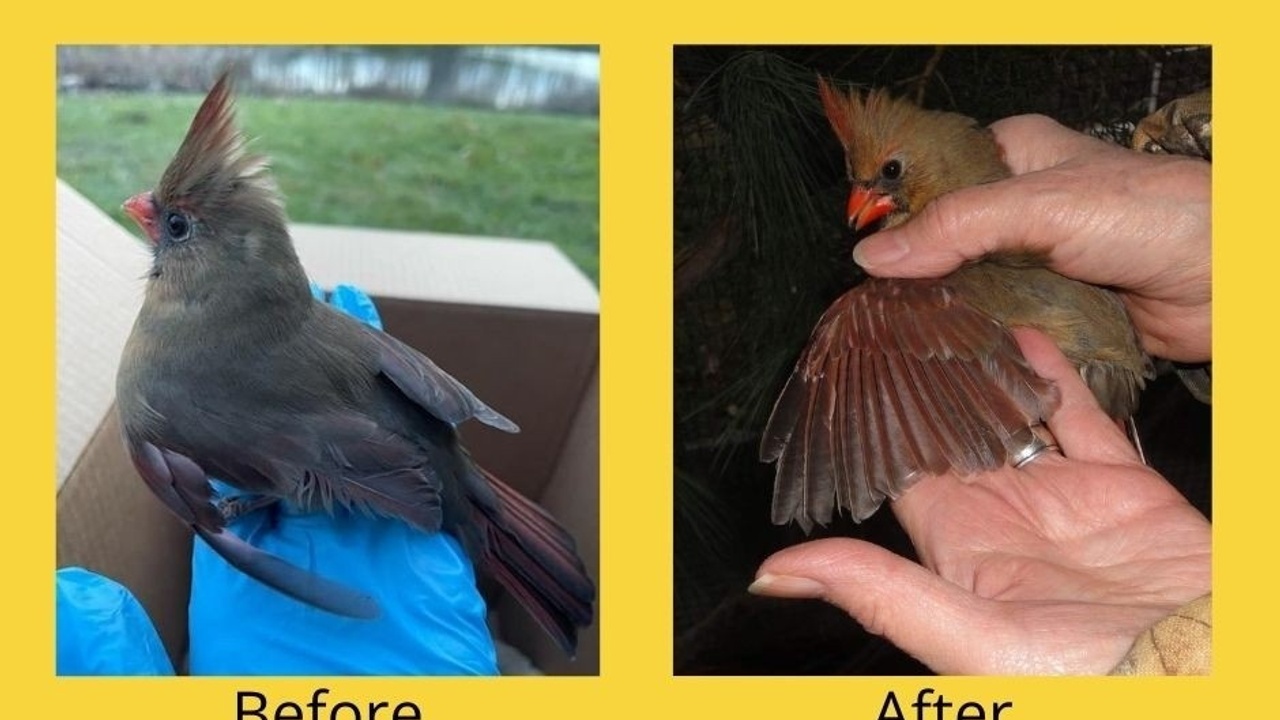 A fantastic update regarding Catherine the Cardinal…

If you haven’t read the first part of this saga, then check out my blog HERE to understand how I came to rescue a Cardinal while 8 months pregnant from the middle of the road in the first place…

Taking in lots of birds, squirrels, sometimes even bear cubs…

Nursing them back to health, giving medicine, feeding them, cleaning out their enclosures & caring for them can be a full time job!

The wildlife rehabber that took in Catherine the Cardinal says she hasn’t had a vacation in a long time!

After Sue-Ryn took in Catherine the Cardinal, she was so great to keep us up to date about what was going on…

Turns out after a trip to the vet & an x-ray, they saw there was nothing wrong with her wing except for the obvious lack of feathers that had been pulled out somehow.

What a relief, it would just take time and TLC to nurse Catherine back to health!

Catherine was kept in an outdoor cage on Wellesley island being, fed & cared for.

Man was I lucky to find Sue-Ryn…

Within a couple months her feathers had grown back & she was ready to fly the coop!

There are other Cardinals in the area that have taken a special interest in Catherine while she was in captivity healing & we know she will be able to have a nice little life up North.

This is what happened the day Sue-Ryn released Catherine the Cardinal...

fast....flew straight up into the highest branches of big old Willow

tree in  the back yard....looking down as if to say"you are never

touching me again!". I saw her today poking around under the feeders.

Yes she grew her feathers in faster than I expected too!  I think it

was the sunshine and the bugs in her diet (meal worms)....I just did

the transporting and feeding...she did the hard part! - Sue Ryn

They say cats have 9 lives…..birds must have a couple up their wing as well!

If you would like to donate to Sue-Ryn here is the LINK.

These are really wonderful compassionate people that selflessly give their time & energy to healing the precious wildlife around us.

OK, more about senior pets in a couple weeks!

Age is NOT a Disease,

Click the button below to learn all about The Senior Dog & Cat Massage Workshop!